My name is Dorcas Agbana, I have been an ECONEF volunteer since early February. I am a fresh graduate from Assumption University in Thailand with an Architecture Bachelors Degree and I am Nigerian. For the longest part of my study I have always been passionate with the fact that architecture can go along way in helping people and the way people live and what interested me more was the idea as Samuel Mookbee puts it that ” Everybody rich or poor deserves a shelter for their soul”, that even the disadvantageous community can have somewhere and someplace to call their own. With this volunteering program I hope to learn the practical aspect of architecture and have the joy in helping the children in Tanzania at the same time.

Since I arrived they were finishing the flooring and plastering on the inside, but we decided to focus more on the outside being that March would be a rainy season and if we didn’t start digging and compacting the path for the Tanga stone around the building it would be difficult to work.

Below i have attached some pictures of the process of doing the path around the building. Firstly we had to digging the path (130 meters from the building foundation) , after was the compacting process with Compact soil. Then doing the blinding (sort of a foundation for the blocks ), then placing and cementing the blocks was done which were plastered later when we were satisfy with how it looked. After that the fabric material was placed (which prevents moisture from the soil to the Tanga stone), then putting white sand, and then finally placing then joining the Tanga Stone with cement (sand was poured on the cement a few minutes after it was set to give it a natural feeling). 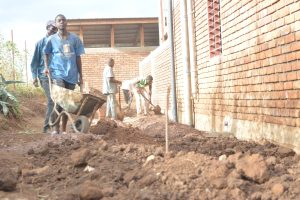 By March when the rain started heavily, we found some water was being collected in areas we didn’t want water to collect, so those areas were fixed and some areas had pipe added which will take the rain water out from the path and move it or rather divert it to the plants. Some areas still have water pooling but we will adjust it later on. 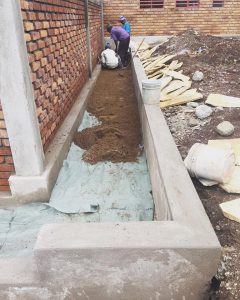 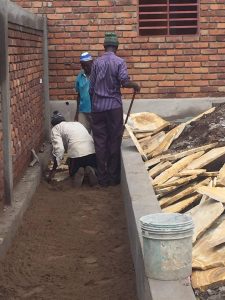 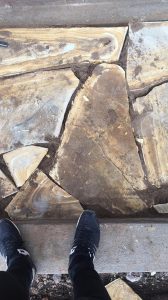 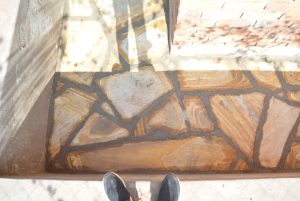 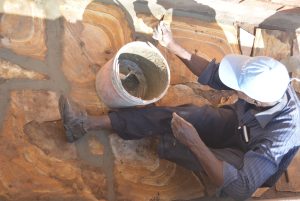 Another thing we completed from the time i came till now was the water system and solar system, We placed the solar panels and solar heaters on the roof and tested the light and water flow( hot and cold water) in each room and each distribution channel respectively. We also put stones to prevent soil erosion at some parts of the site where soil erosion is likely to occur. 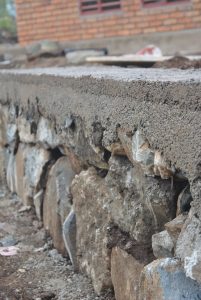 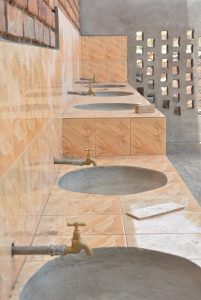 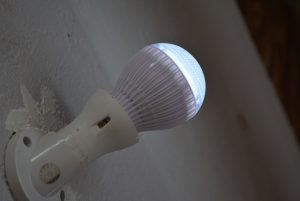 We are currently working on the path around the Garden (Grey water and Kitchen garden) and the watchman house…..